Well, here is the Imperial Lace Bracelet pattern by Sheri Tarrant. I like it. It kind of has a bit of the goth look to it. It is a bit of tedious bracelet to make, but a lot of them get like that eventually. Having to make three rows for length and then do the back and forth thing to connect them did get a bit long. Still… looks cool on my wrist. Isn’t that what matters?

Ok, so I have two shows coming up this weekend, and I naturally try to come up with something new. I purchased the latest Bead and Button magazine and found this new pattern, which is really cool. This is what I have so far: 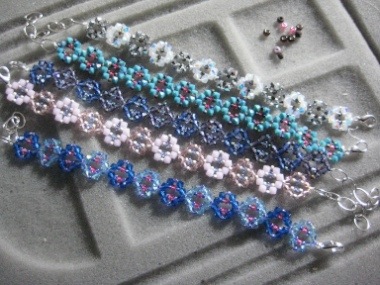 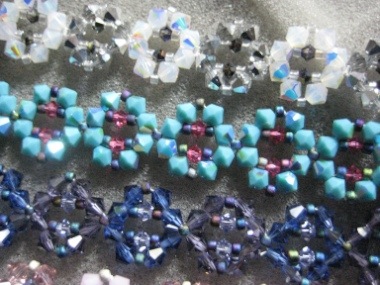 There were some struggles with this pattern. First off, I really was thinking that this could be a bracelet I could sell in the $30 range. Wow, I was wrong. Doing the math, I would be taking a cut at that. Using Swarovski crystals (due to my passion for sparkle), the crystals alone get to about that price. I guess if I want to make some more of these at some point, I can use Czech glass and work it to that price point. In the mean time, I am going to list these at $65. It just keeps the majority of my price points for my woven work up there. I need to drop some down to where other people can afford.

I guess that becomes one of the troubles of selling. So many people say that if you underprice, buyers don’t take you seriously and won’t purchase your goods. But if they aren’t purchasing them at the lower price, why would they put out the cash for the higher price? Does that really make sense to anyone?

The other trouble I had with these was that I put a toggle clasp on one of them. It would have been really pretty too, if it only would have closed. The beaded units wouldn’t let the bar pass through the loop to close. Now that was frustrating. I, of course, then remembered a teacher at Facets of Isis stating that you should always use separate thread for your clasp in the case that something doesn’t work or breaks. Your entire piece isn’t in jeopardy then and can be changed. I just made sure to run my thread through the piece further to make sure that it is all connected and the snipped thread won’t have the bracelet fall apart. I even tugged it a few times to make sure. Ugh, live and learn, right?

So, now I need to add a little crystal bauble to the end of the chain that the lobster clasp hooks to. That should all work. Also, next time I make these, I need to figure out a way to make them just a touch longer. I mean, the chain does that true, but I think it could be done prettier.

Tomorrow night, I need to make a few more journals, price everything and get it all set for Saturday morning. Wish me luck on making some sales. These are two shows before my birthday, so I am hoping the world grants me some profits. That would be nice. You hear me, world?