So, my creativity was on one of those lulls that just has you frustrated as you sit down at your craft desk and stare. I set this place up, I have the new apartment, so now where the hell is my creativity. 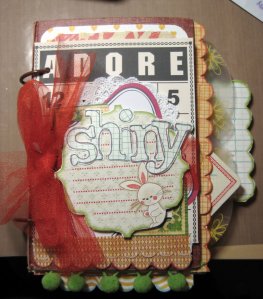 I took the watercolor class at Archiver’s, which sparked the Valentine’s day cards that I had made when Caitlin was over, but this time I went over to Craft Fancy to take a class by Martha Bonneau, where we made this awesome altered book.

I need to learn to create outside the lines, so this was an awesome experiment. I am going to try to continue to create in this book without measuring (much) before setting it up.

I was also proud of myself for being able to make a card in about 30 minutes during my lunch break on Friday. 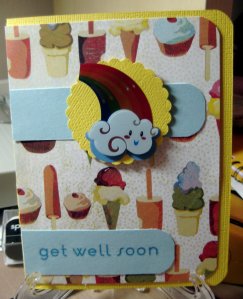 My friend has been home recovering for too long, so who can stay unhappy when presented with rainbows and ice cream?

I am starting to get the grasp of using a sketch once in awhile to spark something.

I also have gotten going on an order for some cards and a journal. The cards are going to take some thought, but when I came across this cute kitty paper at 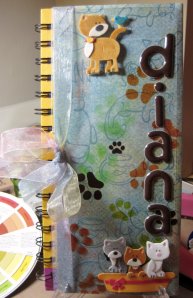 Plus, I came across these adorable American Craft Thickers, which seemed to keep the idea of the fun going.

Finally, for my last piece, I was back in the altering mood. My friend Anne recently got me interested in Black Phoenix Alchemy Lab, which has these awesome perfumes. You can get larger bottles or little samples, which they call imps. Anne gave an initial dose in an Altoid tin, but when I found a similiar tin at Archivers (by Art Bin, I think), 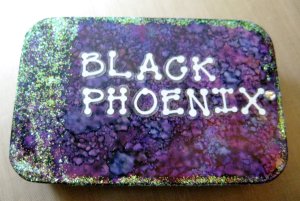 I had to nab it to alter, so I came up with this. Oddly enough, I did not plan to use quite so much Stickles, but due to a clog and then a burst of glitter, I couldn’t let it go to waste. I think it worked, though. I love how the alcohol inks worked. I just hope that I don’t end up scratching any of it off.

In the meantime, when not crafting. I just finished Patricia Brigg’s Bone Crossed and have just started on Stephenie Meyer’s Host. I have really been loving the reading and crafting thing lately.

Well, off to watch Chuck and Heroes. Gotta love Mondays!

One thought on “when creativity sucks, take a class”